Climate Change A War We Must Not Lose

Climate change is the greatest threat to our planet and civilization.

In the Northern Hemisphere, the freezing snow storm and Arctic blast in the US Eastern seaboard is already taking its toll.

Former US Vice President Al Gore will be coming to our country this March for the Climate Reality Project that he is spearheading. Recently, we had sat down with Gore's staff led by Director Mario Molina for the success of this forthcoming prestigious event. 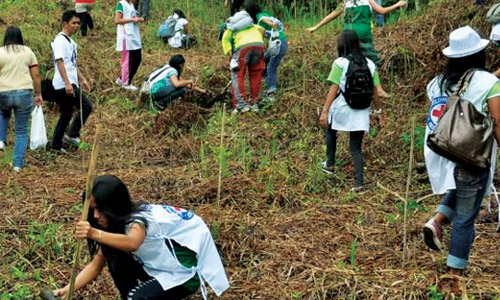 A selected group of 700 delegates from around the world will be going through the said 4-day Leadership Corps Training They will be trained about climate science, communications, etc. to enhance their skills as volunteer community leaders.

Meanwhile, climate change has caused droughts, typhoons, freezing weather and an enhanced El Niño. While waters of the Pacific Ocean continue to warm up, species are dying and the fish stock elsewhere will be reportedly depleted.

Should it happen, we can expect the cost of fish oil to rice and not even able to meet the world's demand for it.

Over 3 billion people rely on the oceans for their food and livelihood, yet the business-as-usual attitude continues unabated.

Our seas and oceans continue to be polluted while the ocean acidification seems unstoppable in its carnage. How many are aware that the oceans have increased their dead zones and gyres?

Worse, oceans are our largest carbon sink sequestering the life-threatening-carbon dioxide! Turn the other and see how forests everywhere are almost gone, making them incapable in carbon sequestration.

In a recent environmental summit in the Philippines, the Department of Environment and Natural Resources (DENR) confirmed that our country now has only 6 million hectares of pristine forest left from more than 22 million hectares we had before!

They also reported that they planted over 1.5 billion seedlings; however, in spite of the government's environmental drive, working hand-in-hand, with active NGO's DENR reported that it has recently identified 23 'bigtime' illegal loggers.

Moreover, it may have stopped more than 200 illegal loggers isn't it a mystery why they cannot obey the total logging ban and arrest those aforementioned illegal loggers? No one is above the law, no matter how 'bigtime'!

They may have planted over 1.5 1.5 billion seedlings, yes, but it takes years for a single tree to grow. And mind you a plantation is NOT a FOREST! Why? Because it does not have any biodiversity, does it? That's plain common sense. That is why we have always been against palm plantations because these causes an imbalance to our adverse effects will surely cause more harm than expected.

The sad thing is, not everyone understands about our ecosystem. This is where massive re-education about the environment is a must.

In the meantime, we continue to preserve our mangroves and our planting because these mitigate greenhouse gases (GHG) and sequester the carbon dioxide.

Mangroves also adapt with the effects of storm surges. They are reliable coastal protection from powerful typhoons. Classic example was what happened to Molocaboc Island in Sagay City, Negros Occidental. The said island with stood the wrath of super typhoon Yolanda because of the thriving mangroves around it.

The mangrove forest is akin to the coral reefs. Both play a vital role in our planet: they are the beginning of the food chain. They must be protected or we will all perish.

We hope that with the forthcoming visit of former US Vice President Al Gore, author of the book, and Academy Award-winning documentary, 'An Inconvenient Truth', our leaders will combat climate change with persistence, integrity and an objective to win.

With all that is at stake, including our very own children and their future, this is a war we cannot afford to lose.