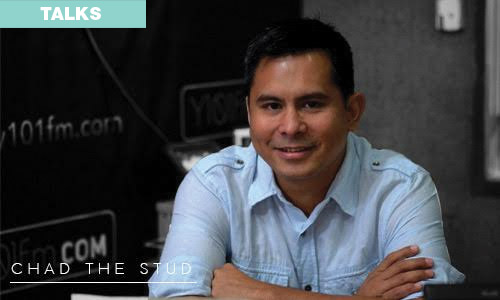 You know him from The Midday Vibe, the man from the 80’s, the stud you love. So here’s a summary of who he is.

Everyone knows who Chad the Stud is. He is that smooth voice you hear during midday 10am to 2pm. He keeps your head cool from the midday heat on his radio show The Midday Vibes. He never fails to make everyone jive to the beat, lashing out great tunes every Monday to Friday.

And boy, when Friday Gold Rush rolls in, Chad the Stud gives the whole city of Cebu by lashing out those great tunes of everyone’s youth! During Midday Vibes on Friday Gold Rush, Chad never fails to play those guilty-pleasure 80’s pop hits, and other awesome tunes that everyone still loves.

Chad plays all the best 80’s hits on Y101 every Friday. It’s interesting to note that during the 80’s, a young Chad the Stud would listen to the programs on the very same radio station he is working in right now. As a kid of the 80’, he has been listening to Y101’s Casey Kasem on American Top 40 every Sunday afternoon, and can clearly remember the details of it. To those who do not know, American Top 40 was the past’s Rick Dee’s Weekly Top 40.

Now, Chad is a DJ in Y101FM, and has been very happy with what he’s doing. It shows a lot when you listen to him being jolly and everything. You can really tell that he’s very happy doing service to the people through his radio show in Y101. Talk about a dream come true. He said that he is very happy because nothing makes him happier than knowing that the music he plays will uplift everyone’s mood.

Check out Chad the Stud every Mondays to Fridays on the Midday Vibe 10am to 2pm. Only here on the rhythm of the city, Y101, Always First.