To The Smoking Cebuano Youth : Ayaw 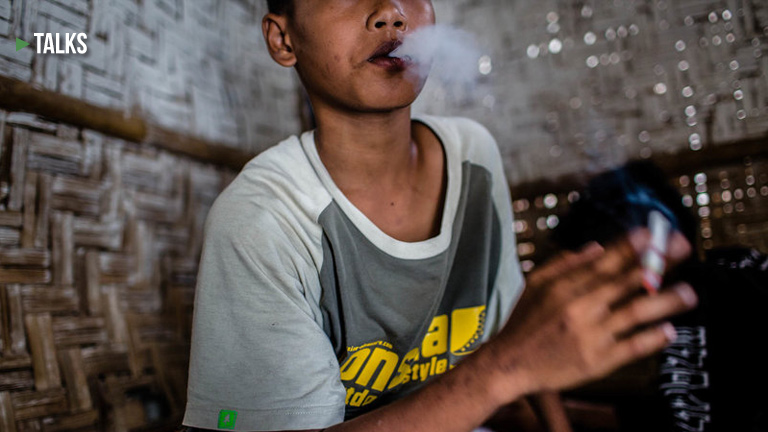 Ran, not his real name, is a sixteen year old junior high school student who started his vice two years ago. “I started smoking because my GF (girlfriend) broke up with me”, said Ran. The break-up caused a lot of emotional pain to Ran and in turn, resulted to a vice that he will ‘regret forever’.

“It’s like I find comfort when I smoke”. According to Ran, smoking somehow relieves the pain he is feeling. Being a millenial, Ran deals with a lot of problems, like a teenager normally does.

“I have a lot of problems with my family, my school life and a lot of things,” explained Ran. Because of these problems, Ran smokes to relieve stress. Normally, Ran smokes 5 - 6 cigarettes a day.

A publication by eMedicineHealth explains that shortness of breath caused by frequent smoking may be a sign of emphysema or heart disease. These normal symptoms ergo are just premonitions of more possible and risky bodily sickness in the future. Other complications include cancers of the lungs, esophagus, bladder, throat and mouth.

“Of course, nahadlok ko [Of course, I’m afraid],” said Ran on the effects of smoking to his body. But he explained that it is difficult to ‘get out’ once you are in the vice already. “The sensation when your mouth is dry and the feeling that your mouth is asking for more cigarettes, is annoying.”

The National Institute on Drug Abuse or NIDA explains that tobacco contains nicotine, a substance that can lead to addiction. And although there are other chemicals present in tobacco other than nicotine, continuous exposure to the substance increases the risk of addiction. The addiction, NIDA explains, is the result of the long-term brain damage brought about by smoking.

Nicotine overdose is also possible, according to NIDA. The toxic effects would be harmful to the body and can even lead to death. The symptoms listed by NIDA are (1) difficulty breathing; (2) vomiting; (3) fainting; (4) headache; (5) weakness; and (6) increased or decreased heart rate. Furthermore, NIDA enumerates ‘withdrawal symptoms’ of smoking which includes (1) irritability; (2) problems paying attention; (3) trouble sleeping; (4) increased appetite; and (5) powerful cravings for tobacco.

“My friends are the ones who urge me to smoke. Sometimes I’d decline their offer but they persuade me, saying I’m a kill-joy, so I would.” An all-boys circle of friends put a lot of pressure to Ran. Most, if not all of his friends smoke as well.

“I try to divert my attention away from smoking by doing my hobbies”. Ran is a soccer player in his school and he usually plays the guitar when he has nothing to do. Ultimately, Ran’s parents do not want him to smoke. In his family, there are no smokers except his grandfather. “My grandfather is a chain smoker but he discourages me in doing so.”

Amy Patterson Neubert, a writer at Purdeu, published an article which explained that there are a lot of factors that can influence the youth into smoking. According to Neubert, this may include the parents, friends and ultimately the environment that the adolescent is in.

“The stores near our house allow us to buy cigarettes, they don’t care.” Republic Act No. 9211 or the Tobacco Regulation Act of 2003, provides that tobacco products should not be sold within 100 meters of schools, playgrounds or anywhere where children or minors may gather. Distribution and reselling of tobacco products to minors (in the RA, refers to people who are under 18) is also restricted.

Executive Order No. 26, ordered by Pres. Rodrigo Duterte puts advertising, distribution and generally smoking on a ban. “Upon knowing the smoking ban, I am happy and at the same time sad,” Ran said in jest. He explained that he is happy because he can now stop his vice and be ‘the man he used to be’, and sad because it is hard for him to quit. “Again, the sensation that I feel, my mouth keeps on looking for it (cigarette) and the feeling is unbearable”.

The past administration by Pres. Ninoy Aquino ratified a law which ordered all tobacco manufacturers to put warning signs (the one we see on the front part of every tobacco pack) on their product and a photo that shows the effects of tobacco smoking to the body of a smoker.

“I’m starting to quit but slowly. I reduce the number of cigars I smoke daily”. Ran explained that from 5 - 6 tobacco, he now smokes only 3 - 4. The Department of Health or DOH also promotes their Smoking Cessation Program which aims to (1) promote and advocate smoking cessation in the Philippines; and (2) provide smoking cessation services to current smokers interested in quitting the habit.