THE EBOLA VIRUS AND CLIMATE CHANGE 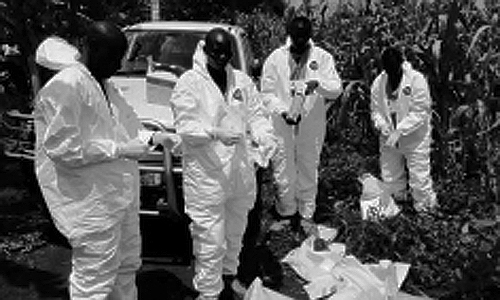 AS I write this, the EBOLA virus is spreading faster than ever imagined. Unlike SARS and Bird Flu, this virus is moving very fast to almost every continent -- and there is no cure.

The United States and Canada are making fortress America safe by putting machines that will detect any fever and making travel ever harder to the states.

Africa is very close to Europe and may spread faster there while in Asia mitigating steps are being taken to safeguard its spread.

Looking back, we did mention countless times that new diseases would likely arise aside from natural calamities that would likely strengthen. We did mention that, increase in poverty, the loss of biodiversity, and shortage of food and water are likely too.

It has been reported that over 14 million Filipinos live below the poverty line. We believe the realistic figure is higher as the wealth does not filter down.

The culprit behind these many viruses and new diseases is pollution -- with all the filth it leaves in our oceans and our planet.

We would not like a repeat of the Irish Potato Famine. Or the great American Dust Bowl that kept the land dry for years causing famine and poverty. All these and more have manifested themselves in our life time and yet nothing but rhetoric has been our lot.

Have we not learned from the past? From Katrina, Yolanda and Ondoy?

Don’t we know that the earth is dying and climate change needs to be beaten. Mitigation is the key.

Did you know that in Louisianna, more than anyplace on earth, the seas are rising that the size of a football field goes under every day. The small island states know as they are impacted as well.

Two powerful typhoons have headed towards Japan and missed us. They would have brought heavy rains and winds that could cripple an economy.

With the UN COP 20 getting ready to meet in Paris next year, the recently held United Nations General Assembly meeting in New York on Climate Change did not achieve anything. It was the Climate March from all sectors of society that echoed what was needed to be addressed.

Mitigate and change the development model.

Win the war against climate change. Say these LOUD and CLEAR: ACT NOW.
This is NO JOKE -- we are running out of food and water. Poverty is on the rise as well as our population.

The economic debacle seems to be doing more good to the environment as growth has collapsed and with it mining and extraction have gone down after they have destroyed the forest.

Oil is at its all time low due to NO growth and yet we still use this fossil fuel.

It is but logical that we shift today into renewable source of energy that will secure the future of our children’s children and our civilization as we know it.

It is time to STOP the dirt and step on the brakes on pollution.

Call it changing the destructive present development model. Call us crazy like you did to many scientists and activists such as Jeffrey Rowland who singlehandedly fought the wrath of the chemical industry against CFC-Chlorofluorocarbons and won when the British agency saw the size of the OZONE layer and as a result CFCs were banned.

What would the world be today without Jeffrey Rowland and many others who fought the good fight and told the truth on the effects of fossil fuels and pollution.

Many Arab springs have broken and there seems to be no end to them. The ISIS war seems to be escalating, the Ukrainian conflict and the Chinese are pushing their weight as they choke with polluted dioxins. Believe me, the Chinese people will have their own Arab spring. Just look at Hong Kong.

The COP20 must not trade carbon dioxide but mitigate it and bring her back to 350ppm. The solutions are all in front of their eyes. Let’s do what we can in our own way and push our leaders to follow suit.

WE MUST PROTECT OUR OWN HOUSE AND COUNTRY.

As I finish this article, the World Health Association warns of the widespread areas for EBOLA and East Asia will likely be one of the victims.

Let’s take the lead from Germany and the rest will follow.

If not, then expect more EBOLA viruses and more devastation. We will have famine and food and water shortages.

For us and our children, let’s act.