THE oceans comprise nearly seventy one percent of our planet.

They harbour more biodiversity and species than any ecosystem in the planet. They are the source of life and no one really knows its value. They just treat it like a giant waste basket. 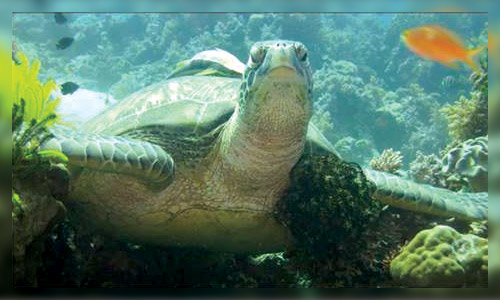 In the past, we had to deal with antiquated fishing methods like Moro-Ami and Kayakas, as well as dynamite fishing. These methods would not only kill the fish but destroy their habitat, the coral reefs. Then came massive trawl fishing destroying everything underwater. Now, we are acidifying the oceans and occupying coral atolls.

Everyone is talking about the climate effects of climate change. From Pope Francis, the APEC summit, the Presidents of China and the United States to Leonardo Di Caprio.

The COP 21 Paris Accord did nothing.

In the meantime while they are talking, the Chinese continue to claim islands and coral atolls in the South China Sea destroying the rich and diverse waters of the coral triangle.

China together with the other countries surrounding the Coral Triangle are already experiencing low fish catch. It is reported that over 3 billion people rely on the seas bounty for food and livelihood. This is no joke. Many will go hungry.

The Coral Triangle as per the researches done by marine scientist is five times richer than the coral reefs of the vast Pacific Ocean. Already the Pacific ocean is acidifying and dead zones and gyres are expanding.

As we all know, the earth is composed of seas and oceans. Almost three-fourths of the planet is water from the seas. The oceans sequester atmospheric carbon dioxide. But more than that the oceans are alive, it breathes and needs oxygen. It harbors the greater amount of biodiversity and species.

Coral reefs as well as mangrove forest are the beginning of the food chain. It is there that zooplankton and photo plankton starts and serve as food for fishes and species. If these ecosystems are destroyed then the marine ecosystem will die and yield no more fish.

It has also been reported that many species already are contaminated by mercury and other toxic substances that are dumped into our seas.

The global commons are not owned by anyone. Not any country, but by the world and we must protect and conserve its biodiversity.

I am writing now on the value of the oceans and their ecosystems. Illegal logging of our forest continues and the silt of the land flows to the oceans. Siltation kills coral reefs which take years for it to grow an inch and only a second to destroy a coral colony.

We need to STOP treating our seas, our coral reefs like they are a global waste basket. They are alive and they will keep us alive as long as they are ecologically healthy.

We urge all our global and local leaders, the corporations and loggers to STOP the carnage of destruction of our oceans.

We need to protect our coral triangle or face the consequences of starvation and climatic manifestations. Famine and poverty will increase and more Arab springs will surface.

LET US SAVE OUR SEAS.