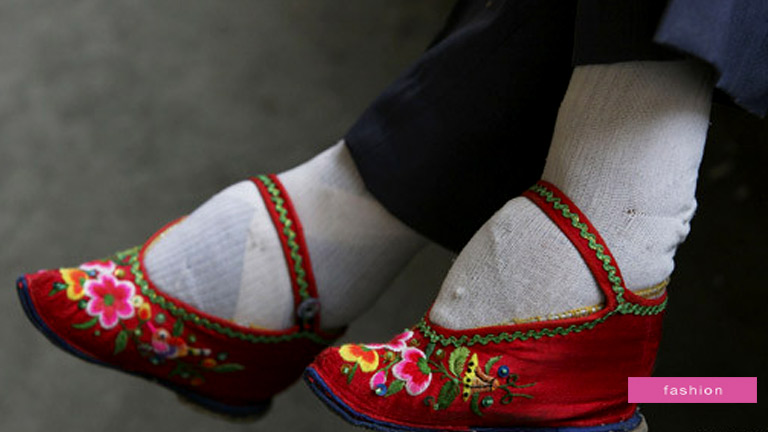 Footbinding, aka "lotus feet," was a custom for women in China from around the 8th century until the beginning of the 1900s.

It began with one concubine, an archaic term for a woman who lives with a man (like a mistress) but has lower status than his actual wife. The concubine was dancing around in front of the emperor with silk wrapped around her feet, and it ended with women whose feet were so disfigured they could only walk very short distances, never mind do the Hustle!

How could it kill you?

In order to transform the foot from regular-shaped to crazy-in-the-head-shaped, women started early, at two to seven-years-old, when their feet were soft and their minds blissfully unaware of what would happen to their feet.

First, their feet would soak in a bath that could be anything from herbs and water to urine and vinegar, depending on the family tradition. Then all their toes except the big one were folded down, and the arch of the foot bent back. The process would go on for a couple of years, with ever tighter bandages and recurrently disgusting foot baths, until the feet were about three inches long.

Footbinding cut off circulation in the toes, and the procedure oftentimes lead to gangrene or other life-threatening infections. Gangrenous toes were actually considered to be a good thing, because that meant the toes might fall off. The ideal was a foot that wasn't a foot at all, but simply a continuation of the leg. If the woman happened to die in the middle of all this, that was a real shame, but at least she'd be buried with nice feet!

So why was this a trend you ask?

Lotus Feet ???? I took this photo while visiting the Forbidden City in Beijing in September, 2014. I was completely surprised to see such a phenomenon existing still. This elderly woman was on an outing too, happily surrounded by her doting family. She is probably only about 20 years older than me. #footbinding #lotusfeet #thisoppresseswomen