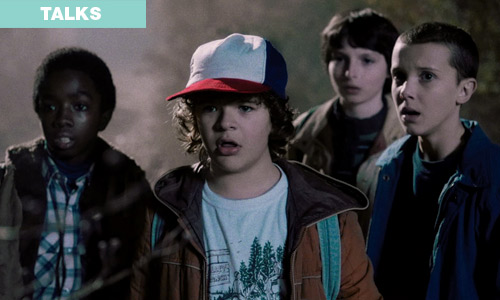 The supernatural-horror-science fiction hit series, Stranger Things is currently being renewed for a second season. The first season of the series revolves around the disappearance of a young boy, and a telekinetic girl who helps his friends in their search, while the boy's older brother, mother, and the town police chief start their own investigations. The show is set in the 1980s in the fictional town of Hawkins, Indiana, and is an homage to '80s pop culture, inspired and aesthetically informed by the works of Steven Spielberg and Stephen King. The first season, which aired in July, was a hit and most of your friends talked about it on Facebook, Twitter, and Tumblr.

Although he never posted anything Strange online, there’s no doubt that Chad the Stud adores the Netflix series that’s more or less about the 1980s, the decade that most of our rhythm crew loves. If today’s music can stir up a sense of nostalgia, TV series are doing it too. Songs can cue out auditory memories to the good old days, but television series can give out sentimental visuals and more, sparking a nostalgia overload especially when the show references the things you actually remembered during the time.

Aside from the story, the characters, and the production design, Chad the Stud, the Midday Vibes host certainly loves the soundtrack. Throughout season 1, you can hear songs by The Clash, Cyndi Lauper, Joy Division and Foreigner. Now talk about a perfect show for a man obsessed with the Eighties!

Catch Chad the Stud every Mondays to Fridays on his radio show, Midday Vibe (10am to 2pm), only here on the rhythm of the city, Y101, Always First.